MSB hosts the annual bilateral meeting between USA and Sweden

On the 22nd of June, MSB hosted the annual bilateral meeting with the US Department of Homeland Security in Stockholm. The Swedish delegation was headed by Director General Charlotte Petri Gornitzka, who welcomed her counter-part Kathryn Coulter Mitchell, Senior Official Performing the Duties of the Under Secretary of Science and Technology. 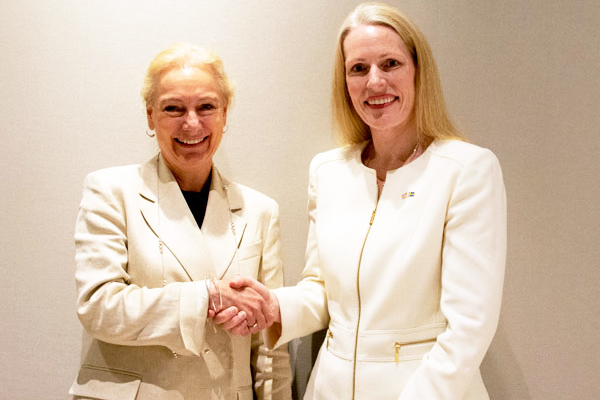 The meeting built on fifteen years of fruitful partnership, and addressed common challenges and outlined joint priorities for future collaboration. A new portfolio on climate adaptation in the field of homeland security was launched earlier this year, when MSB’s Director General visited Washington DC. Other topics that gained leadership attention included radicalization to violence, disinformation, chemical forensics and explosives research.

During the past year, and in the days leading up to the bilateral principal meeting, US and Swedish experts have participated in several expert working groups to delve deeper and identify research needs for the upcoming year. These groups reported out and received leadership instructions at the bilateral executive session. Next year’s meeting will be held in Washington DC. Other topics that gained leadership attention included radicalization to violence, disinformation, chemical forensics and explosives research.