MSB is carrying out measures in support of care services

Outside a medical care centre in Ulricehamn one of MSB’s tents has been pitched. These tents are normally used in disaster response operations around the world, but are now proving useful as temporary medical care facilities here in Sweden. Anyone who feels poorly and has respiratory symptoms can visit the medical care facility, without putting anyone else at risk.

MSB put up the tent outside a medical care centre in Ulricehamn last week in order to provide temporary medical care facilities, following a request from Region Västra Götaland. At the moment, during the first week of May, the tent is being used three days a week for patients presenting with respiratory symptoms.

”The tent meets our needs very well. The municipality has helped us with protective Jersey barriers outside the tent, and MSB’s team have helped us build a ramp for accessibility, which is something we’d otherwise have had to hire someone to do. There are doors at either end – one is used by those coming to be examined and the other by staff,” says Dennis Johansson at the HälsoBrunnen medical care centre, which is run by Praktikertjänst. 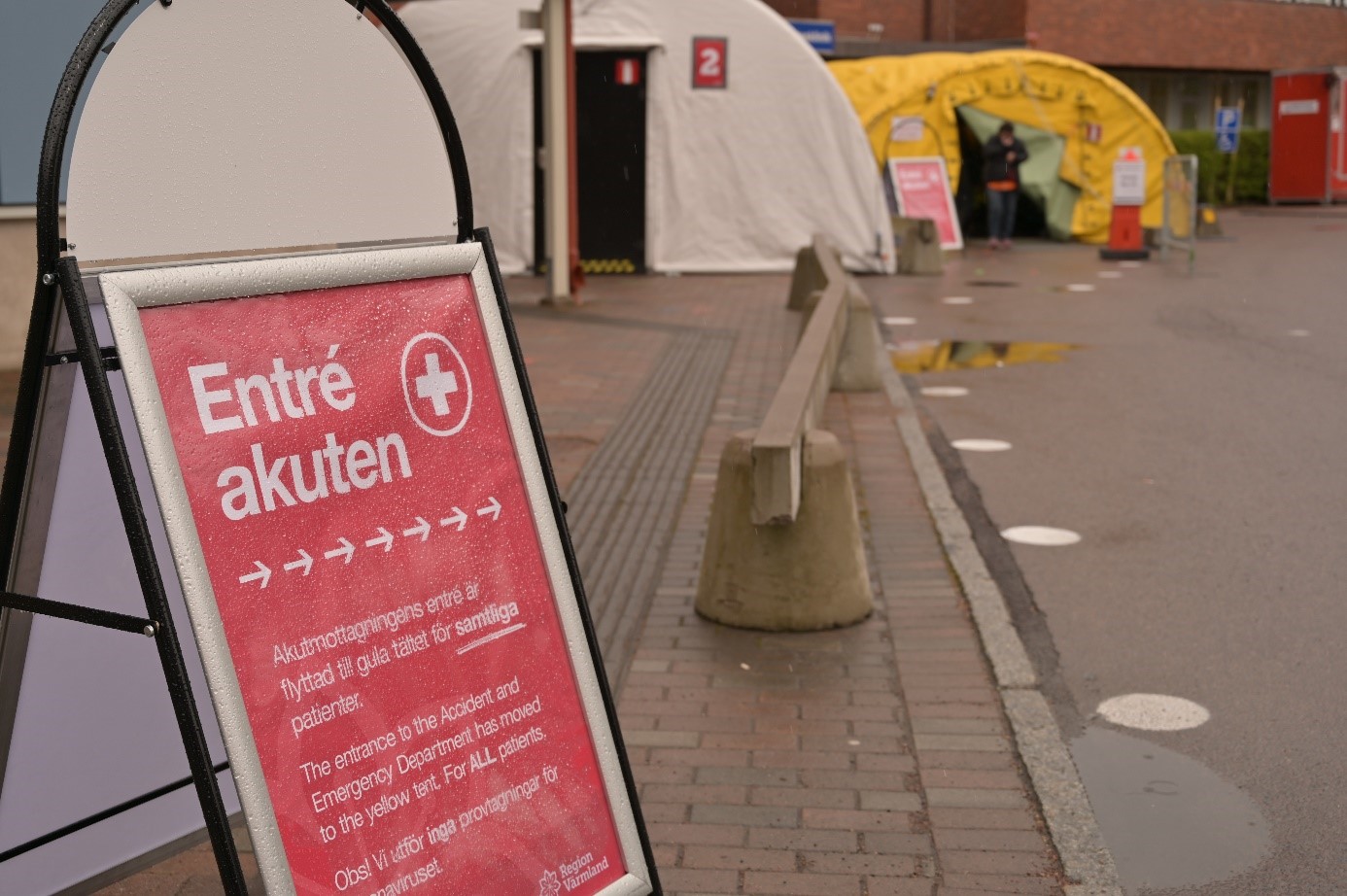 MSB’s tent, on the left, here being used as a waiting room for patients with respiratory symptoms waiting to access special areas in the emergency ward in Karlstad. The tent on the right is from the Fire and Rescue Service in Hagfors, and is used for triage. 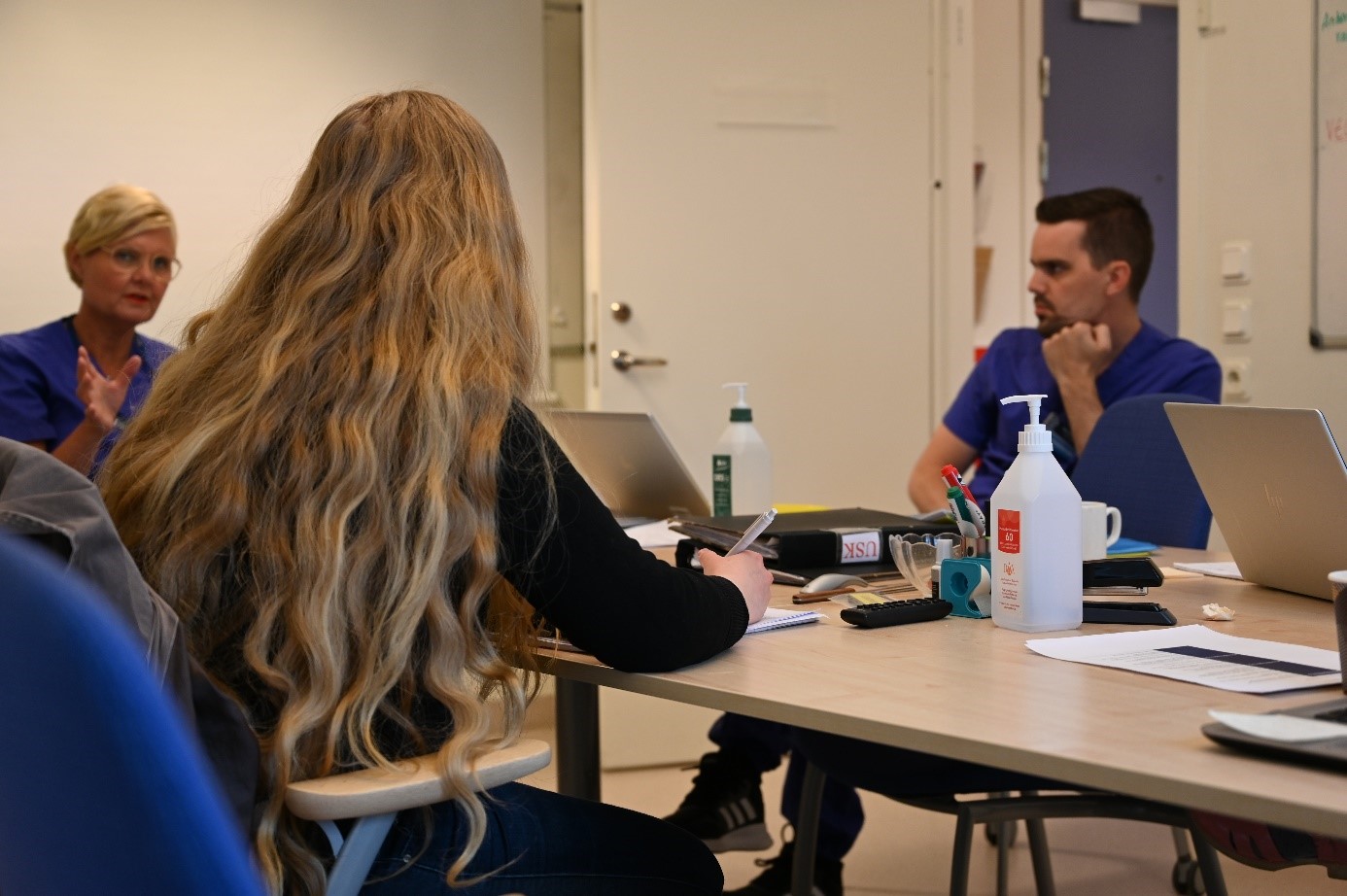 The operational manager at Karlstad’s emergency ward, Ulrika Nilsson, talks about collaboration efforts that have come about as a result of covid-19, both internally within the hospital and externally with stakeholders including MSB.

MSB has already provided a number of regions with tents that can be used in exactly this way. Anyone presenting with symptoms that may indicate covid-19 is taken to the right place for an initial assessment outside of the hospital. This is known as triage, and is the first medical assessment a patient receives. The procedure reduces the risk of spreading the infection to both staff and other patients.

Regions or county administrative boards turn directly to MSB in order to get help. These requests were previously conveyed via the National Board of Health and Welfare, but now stakeholders can turn directly to MSB for support. After deciding to carry out an operation, MSB transports tents or prefabricated modular buildings to the site and erects them with the help of a team of technicians – and this can usually be arranged quickly.

On Tuesday May 7, a tent is being pitched outside Skellefteå General Hospital at the request of Region Västerbotten, and the following day two prefabricated modular buildings were erected in Region Västra Götaland. Earlier in the spring temporary medical care facilities were erected at four locations in Region Uppsala and two locations in Region Värmland – outside the emergency ward in Karlstad to facilitate examination of respiratory symptoms, and to provide a special waiting room where patients with such symptoms could await medical care. Ulrika Nilsson, operational manager of the hospital’s emergency ward, tells us it’s a great help not to have to receive patients without first checking their symptoms.

”In mid-March we saw that something had to be done. We made the decision on a Friday and contacted MSB that evening. They had people on location and putting up the tent within a few hours, just fantastic, ” says Ulrika Nilsson. She also tells us that the tent from MSB serves as a waiting room for those with respiratory symptoms or a temperature until there are vacant rooms available for them inside the emergency ward.

MSB’s operations during the corona crisis

All around Sweden there are many people who have been in various parts of the world doing disaster work, both preventive efforts to reduce the consequences for communities and emergency efforts to deal with disasters that have occurred. The skills and know-how that 30 years’ experience of international operations have given us at MSB is constantly being fed back into Swedish emergency preparedness through our work during crises and public emergencies.
When the spread of the novel corona virus reached Sweden with full force as well, MSB was already in the process of supporting the various stakeholders. Among the support we have provided is bringing home Swedes stranded abroad, spreading information material with the support of voluntary defence organisations and helping municipalities with contacts to voluntary defence organisations in order to support elderly people, providing staff resources to 113 13, and supporting and reinforcing Swedish government agencies and regions with staff and advice.